We caught up with Norm De Plume from Delusions Of Grandeur to find out about the upcoming Plumage Records Disco Lounge at Mare Street in February.

Norm De Plume is a Deep/Disco House DJ, Producer, and host of the Delusions Of Grandeur podcast. He's been spinning Deep/Disco House in London for a long time and his biggest influences are Ron Hardy, Studio 45 and Sound Stream. In 2010 he launched his vinyl-only edits imprint Plumage Records and after a two year hiatus, Norm has returned to the studio and revived the label.

Much like the music that can be heard on his podcast, Norm brings together slo-mo disco edits & deep mid-tempo house vibes through to pacier, underground & disco house.

To celebrate the third release he's presenting the first Plumage Records: Disco Lounge at Mare Street on Saturday 7th February. We caught up with Norm to find out more about the night and the other talent he's brought together for the evening...

LMNH: This is the very first Plumage Records label night, tell us about the label and how did it began….
NDP: In truth until now it’s never been a proper, fully fledged record label. I wanted to make modern edits of some of my favourite tracks and pay tribute to guys like Ron hardy (etc.) that did it the first time round. To be honest it started as a very personal thing, a vehicle for my own productions really. With PLUMAGE03 (forthcoming in March) that has changed. Both Ben & I have laid down original tracks that are a bit deeper than the previous plumage bits and they’re not edits/re-works. We’ve remixed each other’s original to create a 4-track EP.

LMNH: You’ve recently returned from a hiatus. What advice have you got for DJs/artists starting afresh or coming back to the scene?
NDP: Er, I don’t know really. I juggle my DJ’ing & production with quite a demanding full time office job & also my work at Delusions Of Grandeur so I barely manage 1 release a year at the moment!  I suppose just be yourself and make the music you want to make I guess. Be honest & be positive!

LMNH: Can you give us a crash course in Deep/Disco House? What can we expect on the night?
NDP: Different people have different interpretations and there are no firm rules or boxes for music, but my understanding and experience / exposure is loosely this: Disco was basically the pre-curser / blueprint for house music, both the early stuff in the 80s and the music released today, and during the mid- late 90s there were a lot of house tracks released that sampled small parts of disco records and looped & filtered them to create repetitive (and sometimes quite deep tracks ) – artists like Mateo & Matos , Studio 45, The Plastic Avengers & Soundstream etc. Whilst the use of disco samples has never gone away in house music, this style of production got very popular again from around 2008 onwards with people making tracks/edits (including me)  like this but at slower tempos and often revealing larger or key parts of the original track 3 or 4 minutes in. I’m thinking about some of the early productions/edits of people like Mark E, 6th Borough project, The Revenge, Late Nite Tuff Guy etc. When I play live I’ll play records from all periods and usually start off slow, but I also play some straight up house music, some deep tracks and also some original disco 12”s  and sometimes some weird genre-less and ambient tracks to break things up and move to the next section/tempo. Hopefully it all fits together and flows nicely. It’s not a new thing at all, Theo Parrish has been doing it for years, Derrick May blended deep techno with original disco way back, but it’s a vibe/approach I really like. Franklin likes to play a mixture too, whereas Ben plays more deep house usually but with disco / tropical tinges here & there, but we’ll just have to wait and see how things go down!

LMNH: This is Ben La Desh's first time spinning in London… What’s exciting about bringing him to our shores?
NDP: He’s established himself as a really interesting & talented producer and I’ve been supporting his productions since 2012. He’s starting to get the success he deserves but is managing to stay underground and true to himself. He has bags of taste and his deeper tracks have this really trippy vibe that I love but he’s capable of real floor fillers too. He’s also a thoroughly nice guy who is very easy to work with, I’m looking forward to hearing him live again.

LMNH: What’s Franklin got up his sleeves?
NDP: Franklin’s a Hackney local, and fellow vinyl lover like myself.

LMNH: What should we be looking out for from you & Plumage Records in 2015?
NDP: PLUMAGE03 a joint EP from Ben & myself titled the “Give To Receive EP” will be dropping in mid-march and as usual it’s a limited vinyl-only release. Hopefully another Disco Lounge in the summer too.

Rotterdam (NL) based Ben La Desh’s first contact with music and rhythm was during his youth in Africa. Now, years later, after teenage times spent toying with computers and exploring his taste, Ben La Desh’s sound is a tropical and humid fusion of moody disco and deep house. This perfectionist’s first release came in 2011 on Outernational, followed by a solo EP on Sleazy Beats Black Ops entitled Stop That Groove Girl, this first EP went straight to number one in Juno’s sales chart and stayed there for a number of weeks.

Off the back of that he continued to rise steadily through the ranks clocking up more fine releases on labels like Dirt Crew, Young Adults and releasing remixes for the likes of 6th Borough Project’s Borough 2 Borough LP (Delusions of Grandeur) and Urulu on Let’s Play House. Support continues to flood in for his infectious and heartwarming sounds, including tastemakers like Session Victim, The Revenge, Jimpster, Eddie C, Norm de Plume and more.

Franklin learnt the importance of soul in music growing up surrounded by the northern soul and motown influence of his parents, perhaps the most important start any DJ can have. Nowadays you can expect a varied selection from Franklin, mostly lush melodic house peppered with funk, soul and most importantly, that all too often neglected injection of fun. A keen party promoter Franklin has been putting on parties with nostalgic vibes and modern grooves with his ‘Unwanted’ collective for the last 6 years.

Early bird tickets have now sold out... Get your tickets here while you can.
If there are any tickets left on the night, it'll be £5 entry before 11pm and £8 on the door after 11pm. Depending on availability.

Have you signed up for an EU Granfondo like L'Etape du Tour or looking for your next challenge? All Things Ride + Dirty Wknd have teamed up to provide an information evening on Wednesday 16th January from 6:30pm to answer all your burning questions. 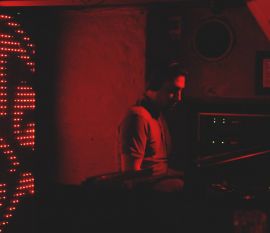 We had a quick chat with Norm de Plume about the next Plumage Records' Disco Lounge at Mare Street on Saturday 9th May.

Having brought Ben La Desh to London for his debut back in February, Plumage Records' Disco Lounge returns on Saturday 9th May at Mare Street.